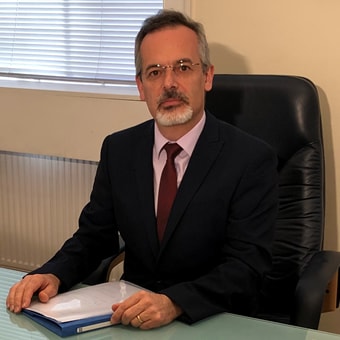 Dr Stephen Darius Rejali graduated in medicine from the University of Manchester in 1992. During his undergraduate training he obtained a BSc degree in Immunology and Experimental Oncology. His undergraduate elective was carried out at the Boston Children Hospital ENT Department, Harvard Medical School and Massachusetts Eye and Ear Infirmary. During his junior training he worked as an Anatomy Demonstrator at the University of Glasgow. He obtained his fellowship of the Royal College of Surgeons in both ENT and General Surgery.

Dr Rejali’s specialist ENT training was carried out in the West of Scotland. During this period, he undertook a research TWJ Otology fellowship at the Kresge Hearing Research Institute, University of Michigan, Ann Arbor, Michigan, USA. Research carried out during this period resulted in a publication and an award from the Royal Society of Medicine Otology Section. He obtained his Certificate of Completion of Specialist Training in 2004. He attended for a further short clinical TWJ Otology Fellowship at the Causse Clinic, France.

Dr Rejali was appointed as a substantive consultant at University Hospital Coventry and Warwickshire NHS trust in 2004. He was involved in establishing the Skull Base Surgery Service, Vertigo service, Combined Paediatric Otology Clinic and Eustachian Tube Surgery. His areas of interest include complex/chronic balance problems, ear pain/infections and eustachian tube disorders.

Dr Rejali has carried out research on Ear and Eustachian Tube problems. He has published research papers including work on eustachian tube dysfunction and treatment with Balloon Eustachian Tuboplasty treatment.

FRCS (CSiG) – Fellow of the Royal College of Surgeons of England, 1996

Member of the Midland Institute of otolaryngology