Ear blockage can be due to conditions of the outer, middle or inner ears. Obstructions in the external canal can be caused by impacted wax or swelling of the skin lining due to infection (otitis externa). Middle ear infections (otitis media) with fluid (effusion) cause blockage and hearing loss. Eustachian tube blockage (dysfunction) commonly occurs with an upper respiratory tract infection or sudden changes of the environmental pressure, such as landing in an aeroplane or scuba diving. Stress related jaw spasms (Temporomandibular joint -TMJ dysfunction) can also result in tension of the Eustachian Tube muscles. Conditions with an increase in the inner ear fluid pressure, such as Meniere’s disease and acoustic neuroma, cause ear blockage which may resemble the features of Eustachian tube dysfunction.

Conditions with an increase in the inner ear fluid pressure (endolymphatic hydrops), such as Meniere’s disease and acoustic neuroma, cause ear blockage which may closely resemble the clinical features of Eustachian tube dysfunction. Sometimes, patients complain of ear blockage when they actually mean that they cannot hear properly. 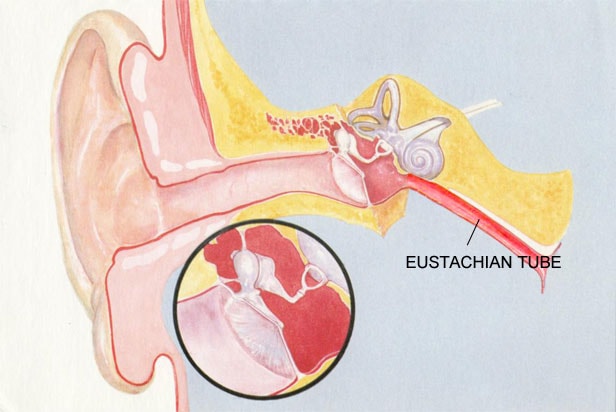 Because of the wide spectrum of possible causes an extensive range of audiological investigations may be necessary to make an accurate diagnosis.

Thorough clinical examination can often, but not always, identify the problem. Basic audiological tests, such as Pure tone audiometry, Tympanometry and Stapedial reflexes, can usually indicate the source of the symptom. However, more detailed audiological investigations, such as Eustachian tube function testing, Otoacoustic emissions or Electrocochleography may be necessary to make an accurate diagnosis.

Key Point: Early inner ear endolymphatic hydrops, which is analogous to “glaucoma” of the inner ear, is often misdiagnosed as Eustachian tube dysfunction, a common self-limiting condition which usually recovers quickly with or without medical treatment.